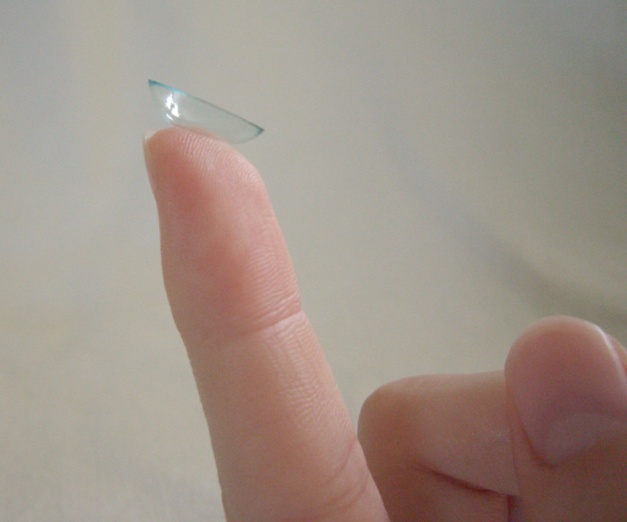 I’ve worn glasses from the age of 5.  In pre-school, I had a patch on for about a year because of a lazy eye.  Thankfully, my doctors say that’s healed right up nicely.  Since then, off and on, I’ve worn glasses (depending on if I could afford them at the time).  Not once, in 35 years, have I ever worn contact lenses.

I’m going through a period of personal change, which happens every so often, where I feel the need to make a few changes to my person.  Not sure why, but it just happens, y’know?  So I put synthetic dreadlocks in and decided I wanted to ditch my inconvenient and yet very fashionable glasses.  I really want sunglasses this summer.  Big beautiful bug-eye sunglasses!  But I digress…

I went in and saw the doctor, and he gave me the lowdown on everything.  I explained to him that I have sensitive eyes, that tend to itch a lot.  He had concerns about prescribing me contacts, in that he was worried my eyes wouldn’t adapt well to having something in them, if they were sensitive.  He explained all the benefits and risks associated with them, and his concerns.  I told him I’d like to at least try them out, and he thought a test run would be a good idea.

He pulled the lenses for me and had his associates teach me how to put them in.  It took FIFTEEN MINUTES to get them in.

Me: “I have no idea how nine year olds can do this and I can’t!”

After getting them in and blinking a bit at the weirdness in my eye, it occurred to me that I CAN SEE!  I have peripheral vision!  I’m not wearing my glasses and I can see!  So weird! So neat!

The doctor took me back inside the office and checked the fitting for bubbles or any kind of weirdness, and he said they fit perfectly.  He checked my vision and all was good.  I went back out to talk to the receptionist, order my lenses, pick up my cleanser and case, and pay for my visit.  I got a year’s supply, one pair every two weeks, because it was the best deal my insurance offered.  They should be here in a week.  I’m going to set an alarm on my Google calendar to remind me when to switch lenses.  I wore the lenses for six hours without much issue, except a little itchyness.  Picked up some rewetting drops at the store that the receptionist recommended and those helped.  It took me about two minutes to get them out.  Progress!

All in all, I feel this was a good experience.  The doctor suggests I wear them daily for a month, for my eyes to adjust to having them in, and to get in the practice of putting them in and taking them out.  Not a terrible idea.  It does mean I’ll have to wake up earlier, in order to get things situated in my eye.  One downside I realized is napping.  I’ll have to take them out if I decide to take a nap.  Bummer.

My doctor mentioned after I got the lenses in and he looked at them, that he thinks I’m going to become a die-hard lens wearer.  I’m not sure.  I enjoyed the freedom of not having my glasses, but not having glasses on is taking an adjustment.  With time, I’ll gain some proficiency in getting the lenses in, and it won’t be such an ordeal.  With time.

While perusing my local mall this week, I noticed that grunge is making its cyclical comeback. I remember grunge back in 1991, my freshman year of college, Smells Like Teen Spirit was #1 on the Billboard charts and my token outfit was cutoffs, fishnet tights, a lace cami, my dad’s old flannel and a pair of work boots with writing all over them. It was cheap and completely DIY.

I think that’s what’s bothering me about whole “neo-grunge” thing. I’m seeing spiked jackets, flannel shirts and pre-worn cutoffs going for a mint at the mall, and it really seems the antithesis of everything there was about the original grunge. It was totally DIY back then. Same with punks, goths and rivets. There were so few clothing outlets available for niche subcultures, so we all dove into whatever Goodwill had to offer.

To this day, I rarely buy anything at the mall that isn’t already marked down on clearance or deeply discounted. I love outlet shopping and thrifting (as can be shown by my many haul pictures). I buy used clothes and make my own patches. I love to spend time looking for outfits online, and deconstructing them in my head so that I can build what I love once I have my sewing machine.

What happened to the uniqueness of grunge, goth and punk? Where is the “I made it mahself!” attitude? When did it become ok to simply flash plastic at the local mall to make an outfit look like you bought it at Goodwill? It makes no sense to me!

I’d love to know, how many of you are DIYers? Are you more likely to buy something off the rack? Clearance or full price? What about thrift stores? What happened to the joy of having that one item or outfit that you know nobody else is ever going to have? Do you really want to pay top dollar to for clothes that look like they were dragged out of a dumpster?

I don’t know. Sometimes I think the creativity has been squeezed out of the fashion world like an overripe orange. You decide. Leave a comment below, I’d love to hear your thoughts on this. Ta!

THERE ARE SPOILERS IN THIS POST!  STOP READING IF YOU HAVEN’T SEEN THE SHOW YET!

This is going to be a long one….

The theme for tonight’s show is “Superfans”.  Instead of using the usual models for the challenge, they will have to design for the winners of their “superfan” contest.  As usual, the first thing someone  mentions is “I’ve never designed for the average woman”.  Facepalm.

Alexander Pope commented that “curvy” was “fun”.  Nice to see SOMEONE getting a kick out of real-women bodies!

It’s nice to see the clients being so open minded with their designers.  I know in past seasons when they’ve done the “real women” challenges, some women have been extremely difficult, but at first glance they seem to be cooperative and excited.  Lots of enthusiasm!  And not only do they get the full tour of Parsons, they get to go on the shopping trip to Mood WITH the designers!  I’m sure that’s super cool for the superfans, but it has to be nerve-wracking for the designers.

As usual, Ken is whining about something.  I thought we got rid of the drama when they got rid of Sandro (you should have seen my happydance).  It’s like we traded off one drama queen for another.

(ok, side note – I really like the “power red” haircolour they’re suggesting by Feria – it’s AWESOME.  I might have to steal it…  which reminds me, I need a haircut.. ANYWHO…)

Ken, looking adorable with white stuff all over his face, HAS to throw a hissyfit because they’re changing up his roommates.  Someone seriously needs a valium.  I’m sure Runway is stressful enough without having some kind of temper tantrum every time something doesn’t go your way.  This has to be the third (I think?) time he’s acted like this.  When he talks to his family, he’s all peaches & cream.  But when reality rears it’s ugly head, he snaps.

I have to interject here.  I don’t watch reality tv for drama.  Honestly, I dislike conflict.  It puts me on edge.  That’s why I was so thrilled when Sandro was disqualified.  The drama detracts from the enjoyment of the show – and the fashion.  Who needs a walking, talking reminder of someone’s bad attitude?

Back to the show…

Hah!  Tim calls Ken on his temper tantrum.  Like Tim discusses in his book, he suggests everyone take the “high road”  (I’ll review the book at another time).  I can’t believe that they’re giving Ken his own room!  Tim is right, Ken does  have anger management issues.  There’s going to be a lot of tension in the workroom, and it makes me worried for the superfans.  They don’t need to have their experiences ruined by childish behaviour.

I’m so surprised with some of the makeovers – some of the changes are so dramatic!  It’s incredibly inspiring to me.

Alexander Pope, who is usually one of my favourites, is really struggling with this challenge.  I can’t imagine why!  He’s so talented, and a suit should have been something he aced.  I don’t understand why he was having such problems (unless it’s simply the fit he’s struggling with).

I’m not going to spoil the runway, I think I’ve done enough spoiling for one night.  Suffice it to say some of the looks were pretty surprising!  The makeovers were awesome.  It’s given me some ideas about my own “makeover”.

Good luck to all the designers, and see you next week! Welcome to the revamped Amphetamine Crash!  Hopefully you’ll find something here that you love.  I’ll be posting fashion and culture related information, including blog posts, youtube videos, thrift store hauls, polyvore sets and whatever else happens to catch my fancy!  Hope we all have a blast!